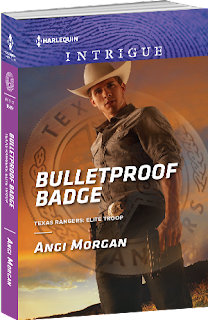 HE’D TAKE A BULLET FOR HER
His key witnesses dead, Texas Ranger Garrison Travis had to protect innocent bystander Kenderly Tyler. Her crucial evidence had two very dangerous Texas crime families willing to do anything to keep her quiet. But Garrison’s undercover status had branded him a killer, and now the bad and the good guys were after them both.
Hiding out with a handsome protector, on the run for her life, was so beyond anything Kenderly had imagined. While there was more than just adrenaline pulsing between them, the Ranger vowed his job was his life. Dare she wonder what would become of them should they actually make it out alive?
Avaialable
SHOTGUN JUSTICE
TEXAS RANGERS: ELITE TROOP, book 2
DUTY, DESIRE AND WHERE TO DRAW THE LINE 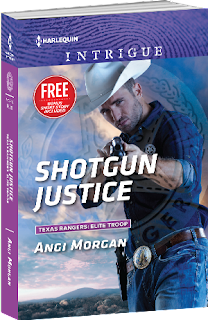 As a Texas Ranger, it was Jesse Ryder’s duty to protect her. As a man, it was all he could do to avoid the temptation of Avery Travis. The Snake Eyes Killer was on Avery’s trail, but the independent deputy didn’t want Jesse’s help. And he couldn’t blame her; he had walked away from her the night she’d offered him everything.
Avery knew Jesse would always think of her as his best friend’s little sister. However, she was fully capable of taking care of herself…and knowing what and who she wanted. Their lives might be in jeopardy, but the true tragedy would be to never have one more chance with the sexy Ranger.
Available
GUNSLINGER
TEXAS RANGERS: ELITE TROOP, book 3
A TEXAS RANGER WITH EVERYTHING TO LOSE…
Going undercover to keep the former wife of a Texas crime boss alive is risky business for Texas Ranger Bryce Johnson. Kylie Scott may have evidence that could put her ex-husband’s family away forever. If she lives long enough to testify.
For five years, Kylie managed to stay off the mob’s radar. With her cover blown, the former model is forced to flee the close-knit community that had embraced her. On the run again—this time with the seductive lawman who’s risking his career to protect her—Kylie battles her powerful desire for Bryce. If they survive, do they stand a snowball’s chance at a future together?
Pre-Order
HARD CORE LAW
TEXAS RANGERS: ELITE TROOP, book 4
HE’D BREAK THE LAW TO GET HIS KIDS BACK
The twins were all Josh Parker had in this world. So when they were kidnapped, he couldn’t rely on his Texas Rangers star to get them back safely. Or involve Tracey Cassidy, the only person he trusted to care for his children.
A family of criminals was asking him to break the law if he ever wanted to see his children again. But when Tracey caught wind of his plan, she knew no matter how big Josh’s heart was, he had a future with his twins to look forward to.  They needed their father. And this was one burden he wouldn’t have to shoulder alone.
Pre-Order
Posted by Angi Morgan at 4:03 PM 3 comments:

One day. One town. Three missing women. Things like this didn't happen in Culpepper. Except that they had—once before. Eleven years ago, young Braydon Thatcher was unable to stop a tragic murder, one that hit painfully close to home. Now a detective, Braydon can't help but notice the eerie similarities between the two crimes. But he has to focus on the present and keep distractions to a minimum. Distractions like Sophia Hardwick, who crashes into town like a Florida thunderstorm, demanding to know where her missing sister is. The attraction between them is nearly his undoing. But he has to protect her, because it's clear someone is resurrecting ghosts in order to punish Braydon. And if he lets his emotions for Sophia get the best of him, she could become yet another victim…

She's wanted by unknown assailants, the government…and the man sworn to protect her

A man like FBI special agent Ash Stryker would never be caught dead at a speed-dating event. But that's where he tracks down Claire Molenski, a computer programmer suspected of selling government information. When he rescues her from a botched kidnapping, he realizes not only that she's innocent, but also that the only way to protect her is to pose as her boyfriend.

Claire knows that their relationship is a ruse. Once the case is closed, she'll never see Ash again, and that scares her almost as much as the abduction attempts. But the way he acts toward her makes her wonder just how much of an act their relationship really is. And if she'll be able to survive long enough to find out.

A predator is no match for her protector…

It's been ten years since the attack that drove Maggie Delacorte to become an FBI SWAT agent. She's an elite fighter now—and when the Fishhook Rapist sends her a letter saying he's coming back for her, she knows she has to find him first. Her teammate Grant Larkin is assigned to the case, and he's determined to protect Maggie, even if it damages the connection that's been growing between them. And even if her attacker has decided that the way to get to Maggie is by targeting the people she cares about. Her feelings for Grant could get him killed, but she needs him —and his love—to make it through the worst danger yet…

Political intrigue, an undercover investigation and a very mutual attraction

As the Kansas City Police Department's archenemy, reporter Gabriel Knight never expected to need its help. But the sexy journalist suspects the death of a politician's aide will shed light on the long-unsolved murder of his fiancée. He demands to team up with tough, beautiful detective Olivia Watson. Sharing a mutual distrust—and a disturbingly mutual attraction—Gabe and Olivia discover that someone's working hard to keep old secrets buried and stop their investigation dead. But as they come closer to the truth they edge closer to each other. Until now, neither has had room in their lives—or hearts—for a relationship. Yet all that could change…if Gabe can prevent them from becoming tomorrow's headline.

Nick Darcy has always needed rules. So when he's temporarily suspended from a job he's dedicated his life to, the unstructured days ahead make him desperate for a distraction. That's when a blast from the past resurfaces on his front steps, bleeding and spinning a wild tale of assassins on her trail.

Their history is complicated. But Nick is still McKenna Rigsby's best chance when it comes to surviving. Her cover blown by a mole in the FBI, she needs a partner who can stay levelheaded in a firefight. She has no doubt they're headed for a showdown. And that this time, there won't be any rules left to break…

"Someone's trying to break in."

A frantic 911 call sends Sweetwater Springs deputy Reed Caldwell racing to the home of his ex-wife. But the kidnappers didn't come for Addison. Their target was her two-month-old adopted daughter. Except she isn't adopted. And Reed is the father. Now he has to grapple with the shock of sudden parenthood while finding a safe haven for Addison and their baby girl. With desire reigniting—and the threats against mother and child escalating—the Texas lawman will do whatever it takes to protect the woman he loves. And the child who needs them both.

We're there everyday!
Recent releases can be found at Harlequin.com, book retailers, or by visiting author websites.
bit.ly/FindIntrigueAuthors

Intrigue Authors who started it all